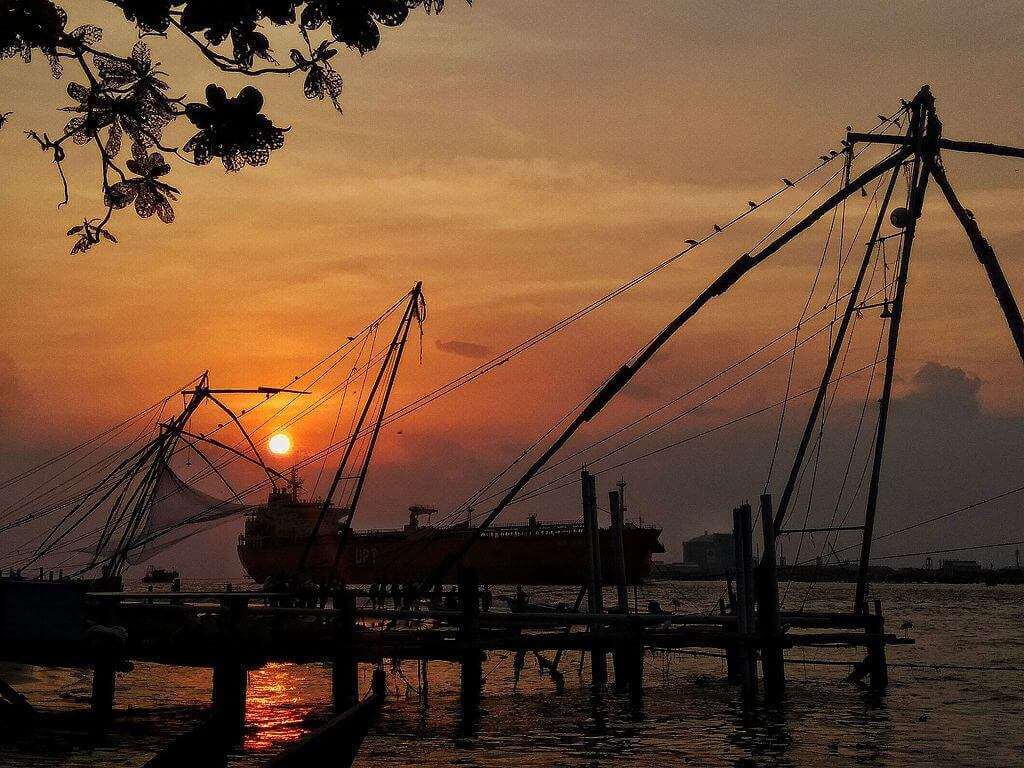 A major commercial port city on the Malabar Coast of India, Kochi is the place that comes straight to our mind. Kochi is often regarded as the “Queen of the Arabian Sea” as it has been an important spice trade center since the 14th century. The Giant fishing nets from China, a 400-year-old synagogue, Portuguese houses and the crumbling remains of the British Raj reflect the unique cultural blend in Kochi and makes it a prime holiday destination. Kochi is also one of the best places to enjoy Kathakali and Kalaripayattu, the traditional art forms of Kerala.

Although you will not be able to cover Kochi tourist places in a single day, we will list out the 10 best places to visit in Kochi to hang out with friends and family:

Now, let’s jump to the top 10 Best places to visit in Kochi and a few interesting facts about them:

Located towards the south-west of the mainland of Kochi, the Fort Kochi is a small water bound region that will take you straight into an old-world colonial charm. Fort Kochi is located adjacent to  Mattancherry and it is called “ Old Kochi” or “ West Kochi”. This region has a strong presence of Portuguese or Dutch colonialism which is quite evident as the various structures, buildings, churches etc were made of European style which still stands strong.

Fort Kochi is among those place in the world (outside China) where the Chinese fishing nets are popularly used. The credit goes to the traders from the court of Chinese emperor Kubla Khan who brought this technique to India. Fort Kochi Beach is the best place in Kochi to enjoy the sunset.

NB: Kochi Biennale takes place in and around Fort Kochi.

Built in 1555, the Mattancherry Palace is a Portuguese palace also called as the Dutch Palace. Located at around 12 km from Ernakulam, this place is a unique example of the Kerala style of architecture interspersed with colonial influences. The palace was built by the Portuguese as a present to King Veera Kerala Verma of Kochi reign.

The key feature of the palace is the collection of Kerala murals depicting portraits and exhibits of the royal family of Kochi. The huge trophy case collectibles in the Mattancherry Place consists of swords, daggers, crown, jewelry, accessories that belong to the then royal family.

The Jew Town is a small narrow street located between Mattancherry Palace and the Synagogue. It is one of the oldest parts where the Jews first settled in India back in 700 BC. The structures and architecture of this area reflect the strong presence of Jewish culture here in Kochi. Jew Town is like a treat for antique lovers.

One can get their hands into much unique jewelry, wooden furniture, artifacts made up of wood or metal, clothes or accessories inspired by Jewish culture and many more. Unlike the name, Jew Town is known for selling antique items inspired and related to Indian, Chinese, Arabs and European culture.

NB:  There are many tourist places between Kochi and Alappuzha. Therefore here we list the 11 Best Places to Visit in Alleppey that you may not miss on your next trip to Kerala.

About 17 km from Ernakulam, the Chottanikkara Temple is one of the highly regarded and worshipped temple in South India.  The Chottanikkara Bhagavathy temple is believed to be a construction of the 10th century. Devotees believe that it is the divine power of this temple that completely cures mentally ill patients.  The Goddess Rajarajeswari (Adiparasakthi) alias Durga Bhagavathy – the mother Goddess, is the presiding deity of the temple.

It is the only temple where Goddess Bhagavathy is worshipped in three forms – Saraswathi, Lakshmi, and Durga during three various time frame of a day. The temple is seated on a hill with splendid green surroundings.  Apart from the main deity, one can also visit the temples for Sastha, Siva, Ganapathi, Nagas and other Upa-Devas.

With an aim to preserve culture, heritage, and folk art education of Kerala, the Kerala Folklore theatre and museum was built under the instruction of George Thaliath and his wife Annie George.  The museum was constructed by 62 skilled workers over a period of 7 years in the Malabar, Cochin and Travancore style of architecture. This three-storied building has around 4000 artifacts and architectural objects, accumulated over the past 20 years.

Among the collectibles in the museum, there are jewelry, utensil, manuscripts and even few instruments belonging to as old as Stone Age. This non- profit organization opened for public since 2009 and is among the popular places to visit in Kochi.

Did you know that Kochi, Alleppey, and Munnar are the frequently visited combination by Foreigners? Kochi to Munnar is about 135km and it takes about 4hrs to reach Munnar from Kochi. And here we enlist 30 best places to visit in Munnar, the hill station of Kerala for your reference.

The National Shrine Basilica of Our Lady of Ransom, which is more commonly called the Vallarpadam Church is an ancient church located in the middle of Vallarpadam. It is another oldest European Church in Kerala which was built by the Portuguese Missionary back in 1524. This Basilica of Virgin Mary is an important Marian Shirin and hence visited by devotees or tourists across the globe.

The Holy Mary of Vallarpadam is commonly called ‘Vallarapadath Amma’. A heavy flood in 17th century ruined the church to a greater extent hence, in 1678 it was reconstructed. Then in the year 1888, it was declared as a special church by Pope Leo XIII and later the Union Government stated it as a major pilgrim center.

The St. Francis Church in Kochi is the oldest European Church in India which was built in 1503. The King of Kochi during that time permitted Alphonso Alburquerque to build a fort. Within this fort, Alburquerque built a church dedicated to St. Bartholomew. This church marks its historical importance in the state of Kerala. The St. Francis church has witnessed the European colonial struggle in India and it is the only church that remained untouched, unharmed by the Dutch Army back in 1663.

The church is also known for embracing a historical moment, which is the Portuguese explorer Vasco da Gama was buried in here. Vasco da Gama died in Kochi in 1524 on his third visit to India and this church restored his remainings. Later in 1934, his remains were shifted to Lisbon(Portugal).

The Paradesi Synagogue of Kochi is the oldest existing synagogue amid commonwealth countries. It was built in 1568  by Malabar Yehudan People or Cochin Jewish community on a land which was gifted by Raja Varma to the Malabari Yehuden community. The Paradesi Synagogue is a Jewish worship house or centre and it is also known as Jew Synagogue and Mattancherry Synagogue.

In the year 1662, the Synagogue was ruined by the Portuguese which was again reconstructed by the Dutch within 2 years. The Paradesi Synagogue has a good collection of rare and ancient artifacts and the interior of the house gives you an impression of European culture.

Cherai Beach is one of the most attractive beaches in Kerala. This beautiful beach is located at around 25 km from downtown Kochi and 20 km from Cochin International Airport. It is one of those few beaches where the backwaters and sea can be seen together. It is located on the north end of Vypeen island.  Cherai Beach is known as the “Princess of Arabian Sea”.

The beautiful Cherai beach is ideal for swimming as it is shallow with mild flat tides. This 10 kilometers long beach is renowned for dolphin watching, that are quite frequent here. The beach is lined by coconut palms and paddy field across that makes it quite pleasant for sunbathing.

Located about 10 kilometers from Kochi, the Hill Palace is the largest archaeological museum in Kerala. This full-fledged Ethno-Archaeological Museum was once the official residence of then-rulers of Kochi and was built in 1865. As the name suggests, it is a large palace sitting on the hilltop and surrounded by a beautiful garden. Spread over 54 acres of land, the complex consists of 49 buildings in the traditional architectural style.

The museum displays 14 categories of exhibits including Crown and ornaments of erstwhile Cochin royal family, paintings, sculptures in stone and marble, weapons, inscriptions, coins etc. The complex has an archaeological museum, a heritage museum, a deer park, a pre-historic park, and a children’s park.

Although there are more are more places to visit near Kochi like Mattachery Police Museum, Kuzhupilly Beach, Munambam Beach, Mangalavanam Bird Sanctuary, Pallipuram Fort, Dutch Cemetery etc, we believe the above listed are the top 10 best places for outing in Kochi.