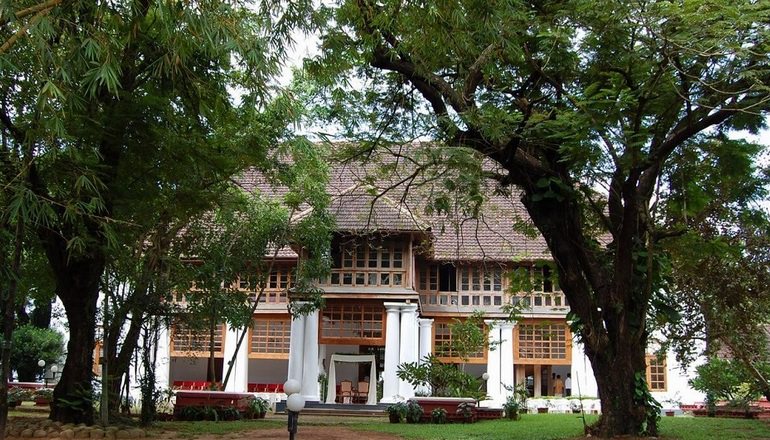 Kerala has been an important state in the Malabar Coast for centuries and has a long history related to the various emperors who ruled this beautiful piece of land. Back in history, this state has also been attacked and ruled by foreign rulers from various parts of the world.  And all these rulers have left remarkable imprints of their existence in the form of palaces, forts, monuments, artifacts, religious centers, etc.

There are many beautiful palaces in Kerala that illustrate the true king-size life, and evolution of the royal families. And the below are the detailed information on the best time to visit, entry fees, and location of these top Amazing Palaces in Kerala, that guarantees a lifetime experience on your Kerala Heritage tour.

Before we do start, here is A GK question for our readers: Which is the oldest Palace in Kerala? Let us know it as comments…

It has now been converted into a museum that collects the artifacts, paintings, and instruments related to the royal family.

Though the palace falls under the Kanyakumari district of Tamil Nadu, it is looked after by the Kerala Archeological Department. This intrinsic wooden crafted palace is located at the foothills of Veli Hills of the Western Ghats.

The Kanakakunnu Palace was built by Travancore king Sree Moolam Thirunal during his rule in Thiruvananthapuram. Back then, this palace was used as an entertainment house for the guests by the Travancore royal family. Since the past decades, this palace is used for various cultural activities.

The palace has a typical Kerala style of architecture surrounded by a garden.

The Sakthan Thampuran Palace, earlier known as Vadakkechira Kovilakam is located in Thrissur district. It is a two-storied building built in the Kerala style of architecture and originally belonged to the Perumpadappu Swaroopan dynasty. Later, it was reconstructed in 1795 by Ramavarma Thampuran, the ruler of Cochin.

Now, the palace has been converted into a museum that has some collection from as early as Stone Age.

The Koyikkal Palace is located in Thiruvananthapuram. It is a double-storied structure that was constructed in the traditional Kerala architectural style. The palace was built in the 16th century for Umayamma Rani, who was the regent of Venad. Later, the Koyikkal Palace was converted into a museum that has a fair collection of antique and rare objects. It also has a collection of coins belonging to various rulers of India and abroad.

The 2500-year-old Karsha coins and even Rasi coins are one of the main attractions here.

With an area covering 54 acres, the Hill Palace in Tripunithura, Kochi is the largest palace of the state. The Palace was built in 1865 by the Maharaja Of Cochin. Back then, it was the official residence of the Cochin Ruler and was their administrative office. The palace comprises of an archaeological museum, a heritage museum, a deer park, a pre-historic park, and a children’s park.

Did you know that Hill Palace is one of the most visited places in Kochi? Here is the list of Top 10 Places to Visit in Kochi (in a day).

The ‘Gajendra Moksham’ with 49 sq. meters have been the largest single mural ever found in the state. It depicts an elephant saluting Lord Vishnu along with other deities is truly a masterpiece.

Alapuzha is one of the favorite destinations for travelers in Kerala. Wondering about the reason?  Don’t worry, here are some notes from us which include the 11 Best Places to Visit in Alapuzha that makes it a  travelers paradise.

More commonly known as the Dutch Palace, Mattancherry Palace is located at around 12 km from Ernakulam at Mattancherry. The Portuguese constructed this palace as a present to the King Veera Kerala Verma, the ruler of Kochi in 1545 C.E. The Mattancherry Palace is a magnificent example of the Kerala style of architecture with a sharp colonial influence at each level. It is a double-storied palace with backwaters as its backdrop.

The palace has a huge collection of artifacts, weapons, musical instruments and murals associated with Hindu Mythology.

Located in Kilimanoor, Thiruvananthapuram district, the Kilimanoor Palace is the birthplace of Kerala’s renowned painter Raja Ravi Varma. The history associated with Kilimanoor Palace dates back about 300 years. However, the palace regained its current state in 1753. The limits of the palace encompass small and medium-sized buildings, ponds, wells, and sacred groves.

While the traditional residential structures of the palace have a close resemblance with the Nalukettu, the palace is the official residence of the erstwhile members of Travancore’s Royal families.

Kowdiar Palace was built in 1934 by Maharajah Sree Chithira Thirunal, on the Pallikettu(Wedding) of his only sister, Maharani Karthika Thirunal Lakshmi Bayi with Lt. Col. G. V. Raja.

Kowdiar Palace is the residential area of the Travancore Royal family. This palace is not a typical tourist destination and hence is not open to the public.

Arakkalkettu or Arakkal Palace is the royal house of the only Muslim Royal family in Kerala. It houses a museum named as Arrakkal museum. The museum is actually a section of the palace, which was renovated by the Government of Kerala and is open to the public.

Arakkal Palace is situated at Azhikkal and is about 2 km from Kannur city.

Kollangode Palace is situated at Kollangode in the Palakkad district of Kerala. Kollengode was the seat of Vengandu Swaroopam (Kollengode dynasty). Known by the name Vengandu Nambidi’s, they were the rulers of the eastern side of Palakkad.

The Pazhassi Kovlilakam or Pazhassi Palace was demolished by the British after the death of the legendary freedom fighter Veera Kerala Pazhassi Raja. The Pazhassi Padinjare Kovilakom is the palace where the descendants of Pazhassi Raja lived.

Pazhassi Padinjare Kovilakom was built in the year 1903. Sadly, this palace is now in its ruined state.

Halcyon Castle or the Kovalam Palace was built in 1932 in the princely state of Travancore. It was constructed by M.R.Ry Sri Rama Varma Valiya Koil Thampuran, the consort of Maharani Sethu Lakshmi Bayi, as a retreat for their family.

Kovalam Palace is now a luxury hotel and is not a normal tourist destination.

Bolgatty Palace is a palace built in 1744 by the Dutch on Bolgatty Island, Kochi. It is one of the oldest existing Dutch palaces outside Holland. It also served as the home of the British governors during the British Raj, which is the seat of the British Resident of Cochin. After independence, the palace was converted into a heritage hotel and resort.

The best time to visit the Bolgatty Palace would be from October to April since Kochi would have wonderful weather during this time.

Bolgatty Palace is now a luxury hotel and is not a normal tourist destination.

When you are planning the itinerary for your Kerala tour, we would recommend you to visit some of the popular palaces and heritage sites in Kerala including the Kowdiar Palace, Padmanabhapuram Palace, Shakthan Thampuran Palace etc.

This will help you in understanding the culture and history of people in Kerala and the influence of Britishers, Dutches and other foreign invaders, before India gets its freedom in August 15, 1947.